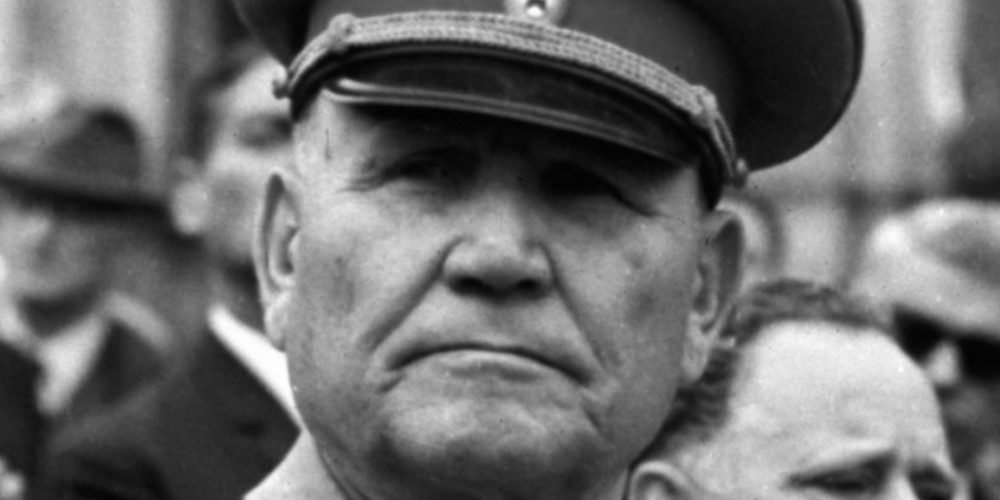 Ivan Konev was born in December 1897 in Lodeyno, north of Moscow. After school he worked as a junior clerk. At the age of nineteen he was drafted into the army. The world was in the throes of the First World War, but he did not get to fight. After the Bolshevik coup, he served as a so-called political commissar in his native region, and from the summer of 1919 he held senior positions in the political apparatus of the army. His “protector” was the People’s Commissar of Defense Voroshilov, who sent him to study at the military academy. He protected him from purges, but after he himself was removed from his post in the spring of 1940, Konev’s career also came to a halt.

After the attack of the German troops on the USSR in the summer of 1941, Konev proved himself as commander of the army, but in October 1941 he completely failed as commander of the Western Front. His entire army was surrounded and nearly half a million of his soldiers fell into captivity. Konev was saved from execution by General Zhukov. By the summer of 1943, Konev was commanding frontline groups on secondary lines. He demonstrated his leadership skills during the Battle of Kursk, where tank units under his command stopped a German attack in the Battle of Prokhorovka. From May 1944 Konev commanded the 1st Ukrainian Front, which operated in the main strategic direction. His troops took part in the Carpatho-Dukla and Vistula-Oder operations (liberating the Auschwitz concentration camp on 27 January 1945) as well as the Berlin operation, among others. Together with other Soviet frontline groups, it joined the Prague operation, liberating northern, northwestern, northeastern and central Bohemia and penetrating Prague, in the middle of the uprising there, on the morning of 9 May 1945.

After the war, Konev served first as commander of the Central Troop Group in Vienna, then in the spring of 1946 he took over as commander-in-chief of the ground troops, but from the autumn of 1951 he had to be content with the post of commander of a minor military district. It was not until the spring of 1955 that he returned to the highest office, becoming Deputy Minister of Defense and Commander-in-Chief of the Warsaw Pact troops. At the same time, he was deployed to provide military solutions in politically controlled countries: in the autumn of 1956 he crushed the Hungarian uprising, and from the summer of 1961 he solved the Berlin crisis by building the Wall there, his last official action. In May 1968, while still leading a military delegation to Czechoslovakia, he was perhaps unwittingly involved in the preparations for the August occupation. He died in Moscow in May 1973.