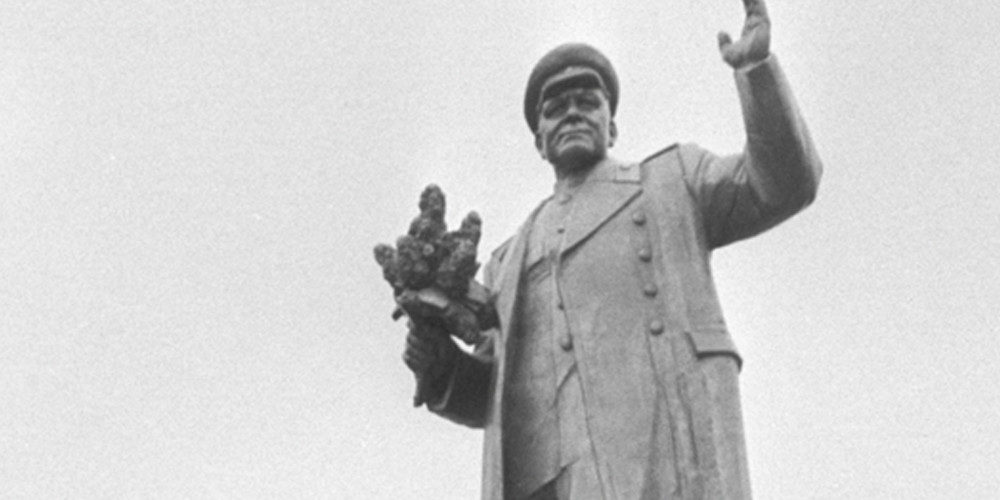 A great honor took place on the prague’s square „Náměstí Interbrigády“ on 9 May 1980. The communists celebrated the anniversary of the liberation of Czechoslovakia by the Soviet army. On that occasion they unveiled a monument to Marshal Konev. As was the custom at that time with similar ceremonies, the public received the event lukewarmly. The enthusiasm of the May days of 1945, when people rejoiced at the end of the terrible war and celebrated the Soviets as liberators, had long since faded.

People had a much fresher memory of August 1968, when soldiers from the same Soviet Union arrived as occupiers. In 1980, when the statue of Marshal Konev was erected here, the August occupation was officially called “brotherly aid.”

It did not take long for the communist regime to collapse in our country and in the Soviet Union. Just as the August invasion could once again be called by its true name – occupation – so too could the stories that had been suppressed for forty years. The picture of liberation and the end of the Second World War became much more plastic. But when the Prague 6 councilors decided that they did not want a statue of Marshal Konev on Interbrigade Square, the move aroused strong passions. The one-sided myth of the liberation of our country by the Soviet army, long nurtured by communist propaganda, has taken deep root in the minds and hearts of some people.

Instead of platitudes and monuments from the communist era, this temporary exhibition brings testimonies of people who lived through those times and spoke about them to Memory of Nations. They tell of how they enthusiastically and spontaneously welcomed the Red Army in May 1945, but also of how families hid young girls and property from the soldiers from the East. They recall their relief and gratitude that the war was over, but there are also stories of how the Bolsheviks then took those who had resisted them many years before to the Soviet gulags, or labor camps, in Siberia. The witnesses told us about Stalinist communism and the Czechoslovak version of it. They experienced the hope and the huge disappointment of 1968, the joy of freedom after 1989 with the departure of the Soviet armies.

The liberator brings freedom and does not claim the right to decide for the liberated.

In light of current research by historians and the memories of thousands of survivors, we can conclude more than 75 years since the end of the Second World War: The Soviet Union was undoubtedly instrumental in the defeat of Nazi Germany. But it did not bring us freedom. It liberated us from the Nazis, but it did not liberate us for freedom. The Red Army often behaved like a lawless conqueror in the “liberated” territories. Considering what took place in this country under the supervision of the USSR during the forty years of communist totalitarianism, it is no wonder that today we are loath to call the Soviet Union a liberator.